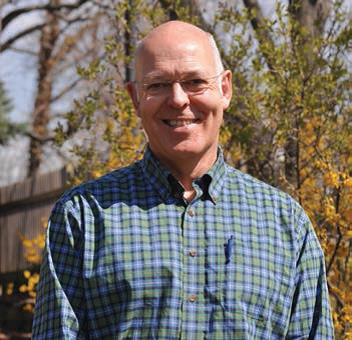 Having grown up in Maine, Elwood “Woody” Howard earned a B.A. in History from Brown University and worked as a professional actor for a decade before coming to HM in 1991. After 25 years of teaching and serving as Chair of the Theater, Dance & Film Department, Howard will retire at end of this school year. In addition to helping develop and teach the theater arts curriculum, Howard, a Bellet Teaching Award Winner, oversees or assists with three Middle and Upper Division student productions in the Alfred Gross Theater, performance pieces in the Black Box Theater, student-written and performed one-acts, and the alumni theater production each year.

Howard has many cherished memories during his tenure at HM, including the time period when the Alfred Gross Theater was under construction from 2001-03. The Theater Department faculty devised creative solutions for producing and performing without an operable theater space. A Midsummer Night’s Dream was performed in the pool, the Little Shop of Horrors production was held in the Rose Hall Atrium and The Pirates of Penzance was staged outdoors. Howard fondly recalls the department actively participating in the planning process of the new spaces. One of his all-time favorite HM productions was Our Town, performed when the Gross Theater opened in ’03.

It has been especially gratifying for Howard to speak with alumni who enthusiastically recollect their involvement in theater. According to Howard, theater is “a form of controlled risk taking” that helps to build up one’s confidence. Howard also notes that the HM theater experience is unique in that students are truly hands-on with nearly every aspect of a production. He recounts a 2013 student-led production based on the first 125 years of HM’s history. Students contributed to set building, lighting and costume design, and scripted and staged sensitive scenes. Students also reviewed archives, old yearbooks and interviewed former faculty and alumni to get a feel for life at the school during years past.

Howard holds an impressive streak of 18 consecutive years of supporting the Annual Fund. He lists his admiration for and belief in Horace Mann School as his reasons for giving back. During his long tenure as a faculty volunteer for the Annual Fund, he has always stressed the importance of participation: “It makes a powerful impression for others in the community to see that our own faculty gives.”

It’s no surprise that Howard’s preferred performance genre is musical theater. A lesser known fact about Woody is that he’s a great packer and mover and, for a short time, he ran his own moving company mainly serving actors and artists. After retiring, Howard and spouse Gilbert Twitchell plan to move back to Maine. Howard looks forward to having more time to garden, travel, and take drawing and French classes. While leaving HM is bittersweet, he’s confident that we will continue to lead the way in creating exceptional educational opportunities for students.

Thank you, Woody, for your loyal support of the Annual Fund, dedication to our school, and for inspiring generations of alumni and students to explore their passion in theater arts!