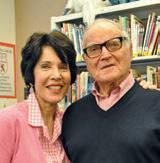 Horace Mann School’s cadre of 181 volunteer Alumni Class Agents provide a critical link between the Alumni Office and our graduates. These volunteers encourage their classmates to be engaged in our community by attending reunions and events, and supporting our current students through the Annual Fund.

One of our most dedicated, long-serving Alumni Class Agents is television pioneer Donald S. Hillman ’42, who produced the first-ever live broadcast of the Macy’s Thanksgiving Day Parade for NBC TV. Don made the most of his time at Horace Mann School and has been deeply involved with his alma mater throughout the years. He remains a member of the HM Alumni Council and celebrated his Class of 1942’s seventieth reunion in 2012.

Don graduated in June 1942 as a member of the first World War II graduating class. “Needless to say, I was very active and busy at Horace Mann, and grateful for the excellent teaching that I received. It certainly provided me with advantages that proved to be helpful as I started my professional business career,” he recalls. He continues, “Probably one of my most remembered experiences was on Monday, December 8, 1941, the day after the Japanese bombed Pearl Harbor. We, the Sixth Form, along with the rest of the student body, sat in the auditorium and listened to the radio’s loudspeakers on the stage as President Franklin Delano Roosevelt declared war on Japan and the Axis.” The memory was indelibly etched in his mind.

He went on to serve in the army during WWII, then completed college at Washington and Lee University in 1948 and attended graduate school at Columbia University. He was hired, at the age of 23, as a stage manager at NBC-TV. Within a few months, Don became a director and played a role in the transformation of regional television to national network broadcasts. Winner of many distinguished awards in the broadcast industry, he eventually moved from NBC to CBS, then rounded out his career at NET, the predecessor of PBS.

As an active alumnus, Don regularly attends Homecoming, reunions, and other events on campus. For example, he and his wife Enid recently participated in “Cover to Cover,” a program that invited HM alumni to share their favorite stories with Lower Division students in a series of readings in the library.

Don has remained involved in the school community for so many years because of his strong sense of gratitude for the education he received at Horace Mann. “Horace Mann is the kind of school that any young person would be so incredibly fortunate to attend. As an alumnus, I feel it is my responsibility to do everything I can to make this experience possible for the current students and for future generations. Serving as an Alumni Class Agent is my way of giving back.”