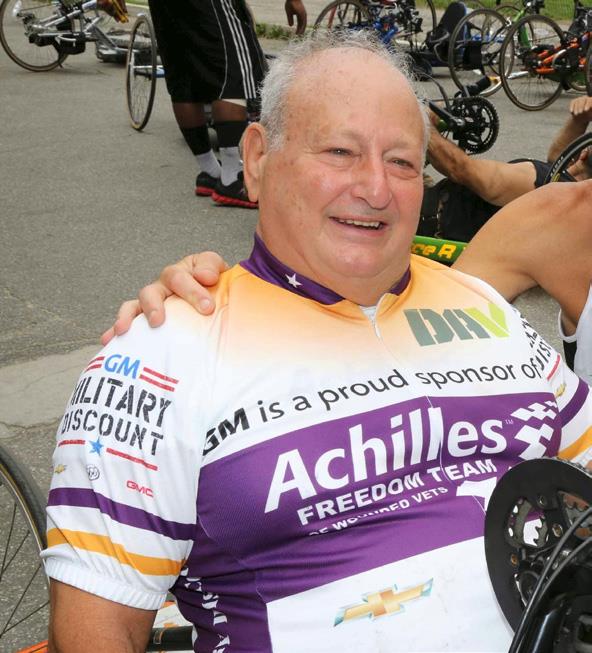 Growing up in Manhattan, Dick began at Horace Mann School in 7th grade and recalls walking up “that hill” from the subway on Broadway, as many students do today. After graduating from HM, Dick earned a BS, MBA, and Ph.D. in industrial psychology from New York University’s Stern School of Business, worked in personnel at the Celanese Corporation, and founded Personnelmetrics, Inc., which provided quantitative analysis to the human resources industry.

In addition to pursuing a career in human resources, Dick has led an extraordinary life of service and community building. In 1965, while getting gas on the New Jersey Turnpike, a car crashed into him from behind, resulting in an above the knee amputation. Ten years later, he joined a YMCA fitness program and started to run again. In 1976, he completed the New York City Marathon with a time of 7:26, making him the first amputee runner to complete a 26-mile run. Since then, Dick has run 72 additional marathons and has inspired countless other disabled runners and athletes through Achilles International, which he founded in 1983 and now leads fulltime. The nonprofit organization stresses goal setting and relationship building to its members, which include children, teens, adults, and veterans. It currently has chapters in over 40 countries. Being a part of a community has allowed thousands of runners across the world to overcome the stigma of running with a disability. “Running with a prosthetic leg used to be something that was hidden,” Dick commented. “Now, disabled athletes are a part of a community and can run with pride knowing that there are others just like them.”

These core principles can be traced back to Dick’s days as a student at Horace Mann. Dick participated in soccer, track & field, football, and captained the wrestling team. His competitive drive and appetite for athletics grew out of a love for his teammates and the social fabric that team sports provided. Dick looks back on his coaches, teachers and classmates with extreme fondness. “Horace Mann students learn the importance of help, support, and leadership through their strong relationships with teachers and coaches,” remarked Dick. The wide array of academic, athletic, and extracurricular options Horace Mann has to offer “gives every student the opportunity to take on a leadership role,” Dick added.

Traum has enjoyed yet another prolific year. His book, “The Courage to Go Forward” was recently published, and he completed the Boston Marathon on April 15th. Despite his busy schedule, Dick continues to be a dedicated volunteer for Horace Mann. When asked why being a class agent and giving back is so important to him, Dick stressed that it is “all about the relationships.” “It’s a great way to get on the phone with some of my old classmates and share memories.” Remarking about his 60th reunion last year, he smiled and stated that, “It reminded me of going to a play and seeing your teenaged friends playing old men. Put some padding around their stomachs, rework their hair and draw some wrinkles around the face! Despite many years later, we remain the same kids at heart.”

(Article appeared in the 2019 Donor Newsletter)