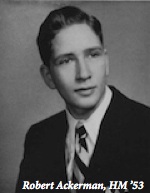 Now a staple of Tuesday assemblies, today’s Alma Mater began as one composer’s vision. Dr. Robert Ackerman ‘53, now a noted neurologist in , composed the current Alma Mater, which celebrated its 50th anniversary in 2001. When asked about his lasting contribution to HM in 2002 in an article in The Record, Dr. Ackerman recalled that he wrote both the song and the lyrics while studying composition at the Julliard School Saturday Program. "The Alma Mater at the time was to the tune of the Thanksgiving Hymn," he said. "I thought HM deserved something original. I wrote that Alma Mater the spring" of 1952. One of the song’s most potent stanzas, "Great is the truth, and it prevails," translates into Latin as "Magna est veritas et prævalet," HM’s motto. The song was updated in 1995, taking into account the change to a co-ed student body, among other things. Currently, students and faculty sing the Alma Mater once at the end of every assembly.

"Magna est Veritas et Praevalet" or "Great is the Truth and it Prevails," the Horace Mann motto, adorns the Olshan Lobby in large silver lettering. This Latin phrase, however, was not HM’s 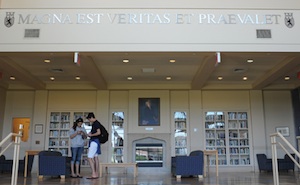 original motto. Nicholas Murray Butler, the President of Columbia University from 1901 to 1945, founded HM as a unit of Columbia’s Teachers college and selected its original motto, "The patience to be thorough, the concentration to understand, and the persistence to grasp and apply," according to an article in the 1952 Alumni Bulletin. HM needed a new motto in 1952, because there was not enough space on the seal to accommodate the old motto. Malcolm C. Spence ‘18 and William J. Nagle, then Classical Language Department Head, made a list of potential new mottos, which were subsequently reviewed by the alumni, faculty and trustees. Approximately 600 alumni voted and chose the current motto, said the Bulletin. The motto originates from the Vulgate translation of the Bible, Apocryphal Book 1 Esdras Chp. 4, Verse 41.* Although many students do not know the exact history behind the motto, it remains an important part of HM. Every time a student walks up the stairs to the library or into assembly he or she is greeted by "Magna est Veritas et Praevalet."

The Lion and the Shield 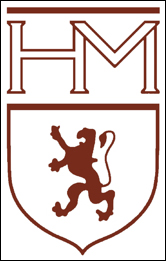 The Horace Mann seal was originally devised in 1958 by Norman H. Bonter, then Director of Development. The image that he proposed to the school’s Community Council featured three key symbols: a white chevron, reminiscent of HM’s earlier connections to ; a lion, from the Mann family coat of arms; and a background of maroon, the school color. An article in The Record in 1959 reported that "the shield should provide the answers to two long-debated problems: creating a uniformity of dress in such organizations as the band, glee club, and the debating society; adopting an HM mascot. Such a mascot would take active part in the cheerleading and the band performances at sporting events. The central figure of the shield, the lion…will provide the basis for a striking emblem to be affixed on school blazers and supplies." Most importantly, the new symbol would help alleviate "the deplorable lack of school spirit at Horace Mann," said the article. Bonter first discussed the adoption of such a shield with headmasters of several schools and several "heraldry experts," said The Record in ’59. After the idea was debated at a Council meeting, it was then distributed to 26 advisories, where it was met with an approval of 22 to four. In order to excite enthusiasm from students, the seal was additionally discussed during an assembly. The lion mascot took on a new role when the Class of 2002 dedicated the lion sculpture outside 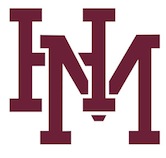 Fisher Hall. “ sculptor Carter Jones interpreted the lion as an 'adolescent' animal, poised on the verge of achieving its adult potential, much like the students at this school,” said a Record article in 2002. Currently, the shield appears only slightly different from its original depiction, having undergone minor modifications. The most recent version of the shield first appeared in the September 7, 1990 issue of the Record, with the chevron eliminated and the school initials, "HM," located above the lion. Today, the emblem continues to show up in a variety of places, including stationary, assignment planners, athletic attire, notebooks, and chairs.

*Editor's Note: The above article has been updated and corrected. The article originally misstated that the motto originates from the King James edition of the Bible. The motto is actually a direct quotation from the Vulgate translation by St. Jerome under the auspices of the Roman Catholic Church in the late 4th Century A.D., specifically Apocryphal book 1 Esdras Chp. 4, Verse 41. Thanks to Alan V. Goldman '75 for the correction and his continued support of Horace Mann School. February, 2018.