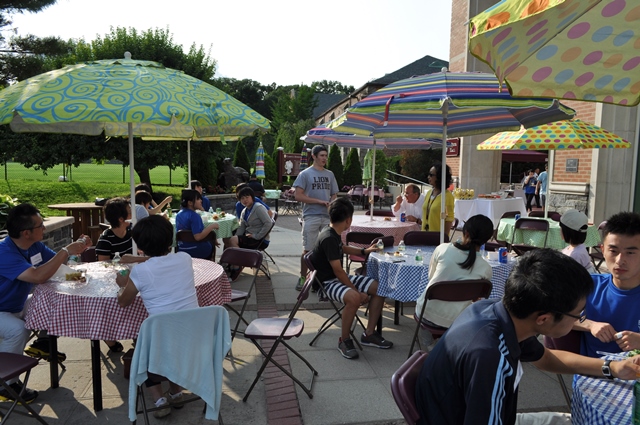 Their plates piled high with hot dogs, fried chicken and potato salad students from Horace Mann School and from two high schools in Japan took a break from their week of studies and activities together to enjoy a traditional, all-American barbecue on the terrace outside of HM’s Fisher Hall.

The barbecue, on Tuesday, July 29, 2014 came at the end of a day of English language immersion sessions, theatrical rehearsals and some basketball. But the classes the students were participating in were not just about learning language. They were aimed at helping the Japanese students find their own “voice” in English, and begin to learn to truly express themselves in another language.

“Express Yourself!” is, in fact, the name of the workshop the students had come to the U.S. and to Horace Mann to participate in. Created by HM Upper Division foreign languages teacher Mami Fujisaki her Express Yourself method of teaching foreign language involves speech, conversation, and theater performance. Each morning of the workshop the Japanese students were involved in a group discussion, and then broke down into smaller groups to practice expressing their ideas on a variety of subjects. Horace Mann School students and several recent graduates of the HM Class of 2014 led the smaller groups, pursuing topics in English. All of the HMers were current or recent advanced Japanese language students at HM and were able to help facilitate conversation. They used their knowledge of Japanese when needed. 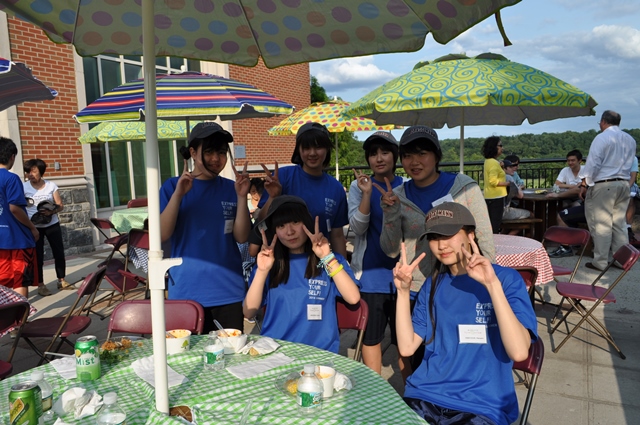 The Express Yourself method of teaching includes a cultural component, which helps foreign language students put the words and phrases they are learning into context. Several HM teachers volunteered their time to introduce the workshop students to new ideas. On the first day of the workshop HM Upper Division French teacher Sonja Rotman spoke about the importance of learning a new language and gave the students a short French lesson. The following day Middle and Upper Division music teacher Alan Bates introduced the students to the steel drum, speaking of the culture surrounding this instrument and teaching the students how to play a few notes. UD theater teacher Joseph Timko worked with the students each afternoon in HM’s Black Box Theater to help them develop a play they performed in English at the close of the program on Friday, August 1.

The 18 students from Japan who participated in the program were able to travel to New York with the assistance of Ashita-Tomorrow, a non-profit organization that supports high school students affected by the 2011 Great East Japan Earthquake and Tsunami. The organization grew from the efforts a group of volunteers made in the early days and weeks after the disaster to reach out to these students, and help them resume their lives as normally as possible. “The goal of Ashita-Tomorrow is to help these young people pursue their dreams, academic and beyond,” said Mami Fujisaki. “Fujisaki Sensei” is director of this program that, over the past three years, has brought together students from Iwaki High School in Fukushima and Kesennuma High School in Miyagi – regions hard hit by the earthquake, subsequent tsunami and nuclear reactor breakdown – with students from Horace Mann and from Yale University both in Japan and the U.S. Along with the Express Yourself workshops, Ashita-Tomorrow activities for the students include cultural exchanges and Skype-based communication with the U.S. students. 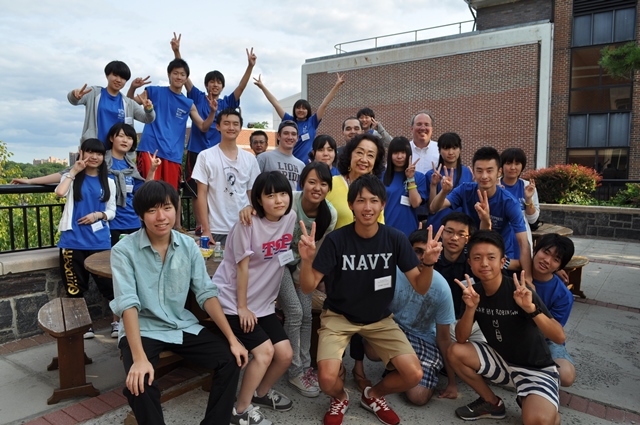 “We are so grateful to Dr. Kelly and Horace Mann School for hosting us during the week, for giving their time, and making this possible,” Fujisaki said. When HM Head of School Dr. Tom Kelly stopped off at the barbecue to share some of the fare prepared by the school’s FLIK Catering Service Director Brenda Cohn and her staff, the students applauded, exchanged traditional Japanese bows, and high fives. They thanked Dr. Kelly for hosting them and providing meals and classroom space for the week. “We’re thrilled to have you here,” Dr. Kelly responded as he handed each visitor a baseball-style cap with the Horace Mann logo in front.

Asked about the value of their brief but intense stay in New York Ryo Watanabe expressed the sentiment of several of the other students. “I would like to study international relations and go into this profession in the future. Seeing different cultures is very important,” he said through the help of recent HM graduate Lenn Uchima ’14, who assisted during the week before getting ready to begin his studies at Brown University. Other HMers participating in this unique cultural exchange were Sinai Cruz ’14, Shyenne Puello ’14, Kundan Guha ’15, Libby Langsner ’15, Sune Tchelistcheff ’15, Megumi Murakami ’15, Joon Dong (JD) Peak ’14, and Dan Heintz ’16. The students needed no interpreter when asked about the evening’s barbecue, however. “Delicious” they unanimously declared.

Jet-lagged as the Japanese students were after arriving in New York on Sunday and beginning the workshop early Monday morning, they nevertheless enjoyed a bus tour of New York City on Monday evening that gave them a chance to view such iconic sites as the Statue of Liberty, even if from a distance. However, the bus made a long enough stop at Times Square to enable the students to walk around the area, making this stop a definite favorite for these teen tourists. On Wednesday night the group received the treat from a Horace Mann family of a trip to Broadway for dinner and a show: a stop at Shake Shack was followed by tickets to see The Lion King. The Japanese students stayed in neighboring Manhattan College dormitories for the week, with recent HM grads Peak, Puello and Cruz serving as their “dorm counselors” to help them negotiate their first American dorm experience. Several HM families invited the students to spend their final weekend following the program at their homes, and planned various sightseeing activities for their guests before they returned to Japan. “I greatly appreciate the generosity of the HM parents who constantly support our program, and of the many families who hosted the students,” Fujisaki said.

Theatrical performances top off the week

The workshop culminated on Friday with the Japanese students performing two plays in English in the Black Box Theater. One was based on a traditional Japanese story. The second, called “Iron Chef” had been written and performed in Japanese by HM students in years past. Sinai Cruz translated this amusing production into English for the Express Yourself students to perform. The drama the first performance evoked, and the humor and laughter the second elicited spoke to the powerful exchange both the students from Japan and the HM students had shared. Their ease on stage with these swiftly-learned scripts demonstrated that, within only five days, the Japanese students had indeed, learned to express themselves in English. And, as they thanked their HM counterparts for being “wise”, “strong and kind,” and “funny and fun to be with” it was clear the HMers’ experience was equally meaningful.