Three years ago, on March 11, 2011, at 2:46 p.m., a 9.0 magnitude earthquake struck Japan. It was the largest in Japan’s history, and the fourth largest earthquake on record, since 1900. As the day wore on, the news grew from bad to worse. The earthquake hit most of the coastal area in the Northern Tohoku region of Japan, about 231 miles from Tokyo, caused a tsunami with 30-foot waves that swept away homes, schools and lives. So widespread was the devastation that it caused the infamous explosion at the Fukushima Daiichi Nuclear Plant (in the southern-most Tohoku area.

An immediate death toll of 15,884 has been confirmed, but most estimates have the number of those who lost their lives immediately and later from related injuries as high as 19,000.

Citizens worldwide were reeling from the news, and anxious to learn how to help. The response at Horace Mann School was overwhelming, as students, faculty, administrators, and HM families from every Division contributed funds to assist those left without homes, schools, places of employment, food, clothing, and, of course, loved ones. HM students wrote letters of support to the victims, and even created hundreds of origami cranes to send to Japan to express their collective grief. Over the following days and months the situation continued to stir emotions as radioactive leaks plagued the region, and news of how residents were dealing with the devastation came to the fore. But, as often happens, once the crisis subsided, while the event remained in memory, responding to it was not the priority it once was. 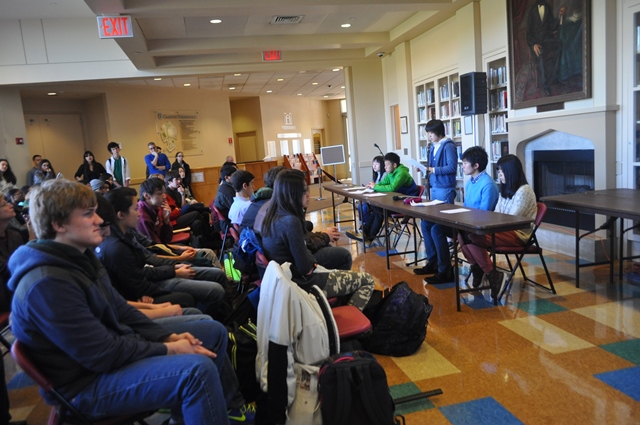 Just three years after the earthquake, during the week of March 29 through April 4, 2014, five students from northeast Japan visited Horace Mann School. The students’ visit, and speeches they had prepared to earn their spot on this trip, served as a stark reminder to the HM community of the events of March 11, 2011. For residents of the region, the experience is no mere memory. It continues to affect their lives in many ways, the students told members of the Horace Mann School community who came to hear them speak. Nevertheless, the students assured their HM audience, they are moving forward as best they can, and preparing for the futures, with each student hoping to be able to contribute in different ways to their country and to world society.

Indeed, it was this need for healing, for respectfully moving on, and preparing for the future that prompted HM teacher Mami Fujisaki to address this issue by co-founding Ashita-Tomorrow, together with three other concerned educators and friends. Ashita-Tomorrow is a non-profit organization that supports students in the earthquake-stricken region, and it was through Ashita-Tomorrow that the five students came to the U.S. and to Horace Mann. Their week included four days of going to classes, lunch, club meetings and sports practices with the HM students who serverd as their hosts, and a one-day visit to Yale University, which has students who participate in Ashita-Tomorrow volunteer activities, and have traveled to Japan to assist in the organization’s support of the disaster-stricken students.

On the first day of their visit to HM the Japanese students presented speeches at a special after-school event in Olshan Lobby. Each student recounted what happened to them on the day of the earthquake and tsunami, and spoke of such ongoing concerns as emotional recovery, the need for environmental reform, and of possible future health issues, following the nuclear explosions. Above all, they spoke of their hopes and plans for the future. The Japanese students were introduced to the audience of about 100 HM students and faculty members who came to the event by their HM student hosts, who also described the goals and purpose of Ashita-Tomorrow.

As the earthquake that took so many lives and devastated towns continues to pose serious challenges for recovering communities, Ashita-Tomorrow supports high school students in affected communities by providing personalized programs that can inspire students in creative ways, the students explained. The organization offers English workshops, weekly communication with American students via Skype sessions in English, and experiences in foreign countries.

“We believe that greater exposure to the international community can allow these Japanese students to evolve into the dynamic and effective leaders they dream of becoming,” Fujisaki further explained. “As time passes, it is easy to forget the extent of the 2011 Earthquake’s devastation or assume that reconstruction will heal the communities. Yet Ashita-Tomorrow believes that we must not only continue to support those affected but also build better futures and stronger communities out of this catastrophe.” 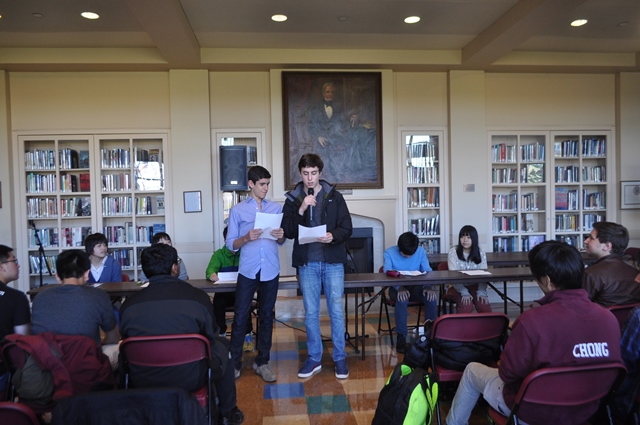 The HM audience listened with rapt attention as each student spoke. “I remember March 11, 2011,” began Shino Yamauchi, a 11th-grader at Kesennuma High School in Miyagi. “We started feeling shaking. The shaking was becoming bigger and bigger. Many students went home. My grandparents were home but not my parents. They are both school teachers, and I understood they had to stay with their students. We were able to talk to my father on the cell phone, but not my mother. Here school is by the sea, and we could see a big fire there. We were so worried.”

The fire Shino had seen was caused by the tsunami. It was four days until her mother was able to return home, and until anyone knew where she was. But, thankfully, Shino’s family was reunited. Once everyone was safe the student’s grandmother and family and friends began taking part in the massive volunteer effort that brought together people from all over Japan, and from around the world. Shino helped make rice balls for evacuees. “We were very tired from making rice balls all day, but we were not so bad off as other people,” she said. The volunteer efforts and contributions that poured in from all over the world moved Shino deeply, and have inspired her to pursue a life of contributing to society. “I learned many things from this volunteer work. People we didn’t know came to help our family. I saw how a lot of small things people did became very big. I’d like to tell you what I learned—that it is important for people to help eachother. That is what I want to do in my life.”

As each student recounted his or her experiences on the day of the earthquake and since, the HM audience learned firsthand about the impact of this catastrophe on the lives of those in the region, but also how profoundly they have influenced the students in planning for their future. Haruka Tanluchi was a seventh grader at the time the earthquake hit. Now a student at Kesennuma High School in Miyagi district, he vividly described that day in March 2011. “Our house was completely swallowed by the tsunami,” he said, showing pictures of cars piled up at the entrance to the remains of his home, flung there by the swirling waters. “My tears didn’t stop. But, neighbors helped us clear the debris. Then more people came, from all over. Many people haven’t yet recovered in their minds. I now believe that saving others must be my role as a survivor.”

Hina Hakozaki was born in Fukushima, but her family no longer lived close to where the worst of the damage occurred. Her grandfather did, however, right on the beach “where I used to swim,” she said. Her family immediately headed there to search for him. “I saw bodies lying there. It weas like hell.” Eventually, her family found her grandfather’s body, “lying 300 metres from his house. I was confused. I was glad we found him, but he was dead.” Shortly after her grandfather was found, the nuclear power plant exploded. “We had to get out. We didn’t even have time to complete his funeral.”

Said Hina, “We lost our daily lives. We lost our happiness. Three years have passed since March 11. We are recovering our lives little by little.” Hina said that during this recovery process she has thought and learned about alternate forms of energy, and urged citizens and governments to seek wind and solar power. Her goal is to become a teacher, to help students learn what citizens need to know to help keep the world safe. Above all, she thanked those in the audience and Ashita-Tomorrow for its support. “Your help is helping us overcome this crisis,” Hina said.

Hina Hakozaki’s words echoed the intent with which Ashita-Tomorrow was founded. “The children who have endured the Great East Japan Earthquake of 2011 have both an immense responsibility and opportunity to lead the recovery efforts in their communities. As Japan rebuilds from the disaster, it needs leaders in environmental research, human resources development, and various other fields, and we aim to support students as they pursue these educational aspirations. We also believe that offering international exposure is especially valuable, as students can learn from and be inspired by different ideas, people, and cultures,” said Mami Fujisaki.

The organization’s efforts to provide the Japanese students international exposure have included Skype sessions between students at Horace Mann School, at Pingray, and at Yale University. These sessions provide both sides an opportunity to practice their language skills. The Japanese students’ visit to New York also gave the HM students who are part of the Skyping volunteer project a chance to meet their “correspondents” in person. 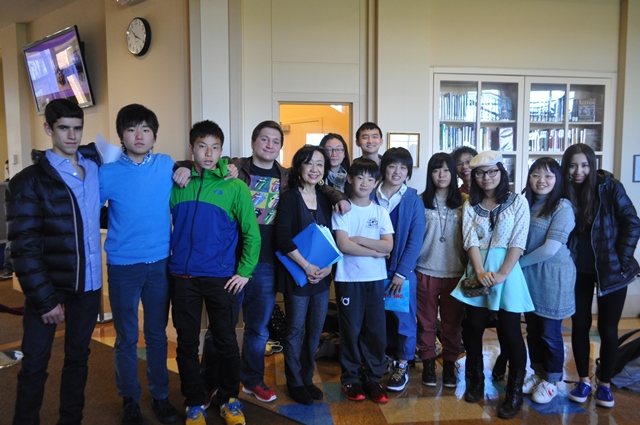 The visit also demonstrated to the HM students and the students from Japan that, despite the distance between their countries and their differences in native language they had a lot in common. The Japanese students arrived on Saturday, March 29, and were met by their host families and taken back to their homes. Most rested for awhile after the long flight, and then began touring New York. Despite the weekend’s heavy rain, host Isaiah Lewis ’16 and his guest Kent Sato enjoyed a trip to some major New York landmarks and museums. Their weekend included visits to the Metropolitan Museum of Art, the Guggenheim Museum, and the 9-11 Memorial, as well as some shopping. “Kent wanted to bring back American snacks, so he stocked up on Oreos, Dorritos, and Cheezits—lots of Cheezits,” said Lewis. The Lewis family also took their guest out to dinner. “Five Napkin Burger,” Isaiah said. “What could be more American?” The two talked about common interests, with sports high on the list. “When we got home I taught him how to play Madden. The second game we played he beat me. I was a little bitter,” Lewis laughed.

Parker Levi ’16 and his family hosted Haruka Taniuchi. “On Saturday we went to lunch in Soho. Haruka was very jet-lagged so we went home and he slept. Then we had dinner, played ping-pong and video games,” said Parker. On Sunday, before heading off for a Circle Line tour of New York and the Statue of Liberty, the two new friends joined the other Japanes guests and HM host families for a brunch at the home of Adam Shaw ’16. “It was great. A big spread from Zabars,” said Parker. The HMer, who is in his third year studying Japanese, said he felt his language skills improving through constant conversationwith Haruka. Haruka’s English was improving as well, the visitor agreed. But, asked how he was enjoying New York, going to classes with Parker at Horace Mann, and experiencing such new tastes as that Sunday bagel brunch, the only expression Haruka needed was his huge smile and enthusiastic nod.

Last summer Mami Fujisaki traveled to Fukushima where she held a week-long “Express Yourself” workshop at Iwaki High School, with the assistance of students from Yale. The workshop featured drama and English emersion classes. This coming summer a group of students from Japan will have the chance to experience that workshop on the HM campus. The students will stay in Manhattan College dorms and have classes in language and theater at Horace Mann. On the weekends they will stay with host families from Horace Mann. At an assembly during the week Fujisaki invited HM students to get in touch with her if they would like to assist with the workshops.