As the Horace Mann School community of students, teachers, alumni and families heads into the holiday season, observances of these days may vary, but traditions unite.

Whether purveyed by memory or by the media, movies are a definite tradition of the season, and one of the most famous of all holiday films was the brainchild of a Horace Mann School alumnus, Valentine Davies of the Class of 1923. 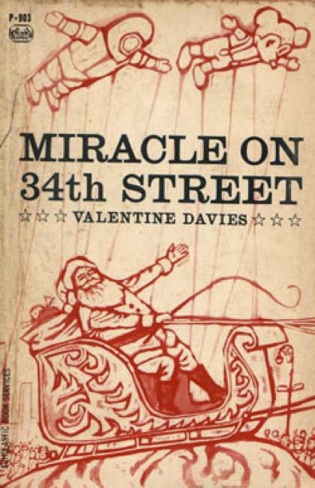 "As a child I had very definite doubts about Santa Claus," wrote Davies in a 1947 article for Book News. "It always puzzled me that while my Christmas gifts were supposed to come from Santa, I must be sure to thanks Uncle George or Aunt Mabel for each one. I was very skeptical indeed. But recent events have changed my mind completely—I’m a firm believer now…."

The book he previewed in this essay was Miracle on 34th Street, which Davies penned to accompany the release of the film of the same name. In his essay, Davies described what prompted him to write his book, and summarized the plot. Here is that story:

Back in 1944, even in the thick of WWII and while serving as an officer in the U.S. Coast Guard, Valentine Davies found himself thinking about Christmas, and reflecting with disappointment on what he described as "the commercialization of the season, and lack of true holiday feeling." He wrote that if there really was a Santa Claus, and if he walked into a department store, he would be "a pretty disillusioned old boy." Val, as his friends called him, outlined a story about Kris Kringle, an elderly gentleman living in a retirement house who is unexpectedly drafted into filling in as Santa Claus in the Macy's Thanksgiving Day parade. Kringle seems so authentic that Macy's hires him to perform the role of Santa Claus at the store, where he manages to spread goodwill among customers and managers alike. The spirit spreads throughout New York, and then nationwide. But Kringle believes he truly is Santa Claus, and nothing short of the New York State Supreme Court can prove him wrong…. or right, as the famous story concludes.

Davies showed the outline for what he intended as a screenplay to his wife, who encouraged him to flesh out the idea and send the story to George Seaton, a writer-director at Twentieth Century-Fox and a friend from this alum's University of Michigan days. Seaton took on the screenplay-writing, and the company went into production for a movie starring Edmund Gwenn, Maureen O'Hara, John Payne, and newcomer child-actor Natalie Wood. During the filming another college friend forwarded Davies' story to yet another Michigan alumnus, who happened to be vice president and general manager of Harcourt, Brace and Company. The manuscript reached editor-in-chief Robert Giroux (later of Farrar, Straus and Giroux) who moved to publish the book in tandem with the fall 1947 scheduled release of the film.

Long story short – the film and book had a pre-holiday summer release, and within months became a bestseller, with over 400,000 copies in print. The screenplay for the film version is faithful to Davies' book – in many instances, line by line. The film captured three Academy Awards, including Best Original Story for Davies, who had put to words post-war America's longing for some old-fashioned Christmas spirit. Sixty-three years after its original printing, the story remains a popular read, withstanding the test of time, despite two themes that raise eyebrows today: For one, Doris, the independent single-mother-manager at Macy’s slowly retreats from her take-charge professionalism to a more "feminine" domesticity, not unlike many women in the work force during WWII did in America’s post-war years. The second is a decidedly anti-psychology bent to the story, but it is offset by a refreshing anti-authoritarianism. Still – the book is worth revisiting this time of year, if only to reflect on Davies' recurring theme that "Faith is believing in things when common sense tells you not to." 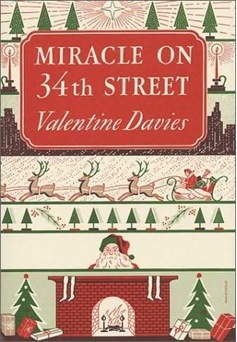 Clearly Davies believed there was a place for him in the world of drama – a skill he first pursued at Horace Mann School. A student at HM since the second grade, he was the son of J. Clarence Davies, a prominent figure in New York City real estate who is credited with developing the Bronx as a residential area. An athlete at Horace Mann who played "midget" through varsity football, he was also in the School's Drama Club, becoming its president in his senior year, when, according to the Mannikin he "often put the audience into convulsions of laughter" as Mr. Pat in the play "Mrs. Pat and the Law." He was also a social star at the School serving on the Senior Dance Committee and Pep Committee in the days when Horace Mann men stepped out to go dancing in top hats. Wrote one Davies biographer: "(He) was first and foremost a writer, developing his craft at college with a column in the Michigan Daily and honing his skills as a graduate student at the Yale Drama School. He walked away from his family's lucrative real estate business in New York and moved to Hollywood to try his hand at screenwriting" – for MGM, RKO, and Universal Studios, as well as Twentieth Century-Fox.

Along the way Davies penned Broadway musicals including "Blow Ye the Winds" and another novel, It Happens Every Spring, a story that earned him another Oscar nomination when this book was turned into a film. Davies was also nominated for Best Story and Screenplay, for "The Glenn Miller Story" (1954), and Best Short Subjects Documentary for "The House Without a Name" which he also produced. His 19 screenwriting credits go on to include blockbuster hits of the 1950s, including "The Bridges at Toko-Ri," "Sailor of the King" and "It Started With a Kiss."

Davies died of a heart attack at the age of 55 at his home in Malibu, California – reportedly in the midst of a trademark hearty laugh. He was known not only for his good humor, and for the gift he gave the world in writing Miracle on 34th Street, but for his work on behalf of writers as president of the Screen Writers Guild, and a member of the Writers Guild of America (WGA) during the tricky times of the Hollywood Blacklist. The WGA has memorialized this alumnus annually since 1962 with the prestigious Valentine Davies Award to the WGA member "whose contributions to the entertainment industry and the community-at-large (bring) dignity and honor to writers everywhere" – just as the award's namesake had done for writers, and believers everywhere.