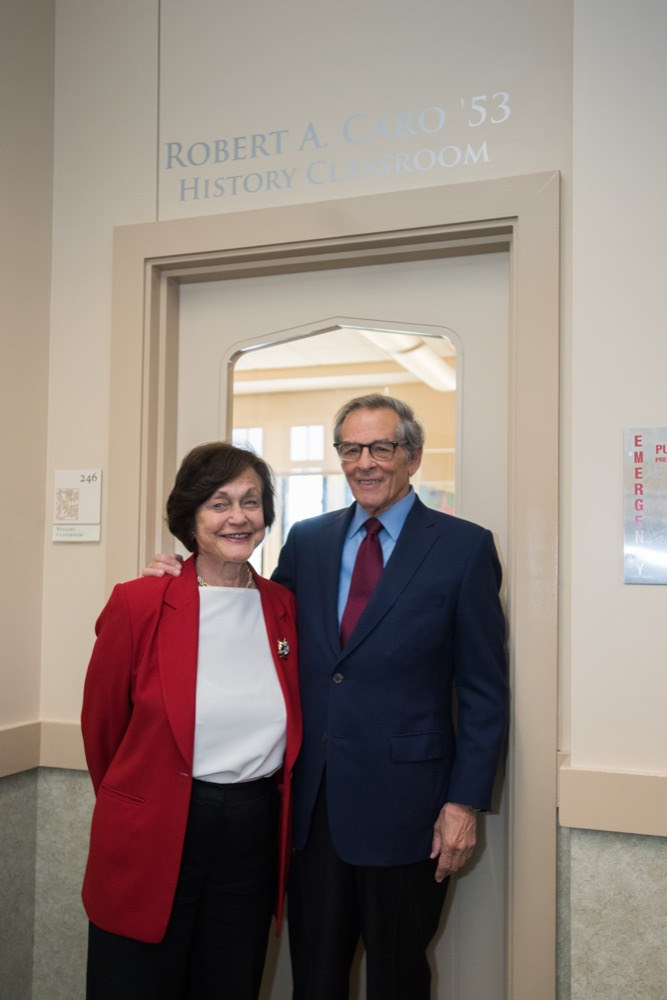 Horace Mann School alumnus and acclaimed author and historian Robert Caro ’53 and his wife, writer Ina Caro, arrived on campus on June 15, 2017 to a warm welcome from HM Head of School Dr. Tom Kelly, Upper Division history teacher Barry Bienstock, and other HM teachers. They had gathered for a recent HM tradition—the awarding of the Robert Caro ’53 Prize for Literary Excellence in the Writing of History.

The award, established in 2011 by Horace Mann School in Caro’s honor, is presented annually at a luncheon at the Head of School’s home. The Caros regularly stop off before the luncheon at Bienstock’s Tillinghast Hall classroom to meet with the teacher. Encountering others from the HM community, along with members of a film crew, was a bit unusual. But a bigger surprise came when the couple neared the classroom door. Ina Caro was the first to notice the letters above the entrance. Letting out an “Oh my!” of delight, she joined the others in urging Bob Caro to look up. There, above the door, were the words “Robert A. Caro ’53 History Classroom.”

Caro read the lettering, stepped back, and quickly wiped a tear from his eye. Learning in that moment that Horace Mann School had named the classroom where he’d studied history as a high school student some 70 years before, still startled, he said, “Of all the things you could do for me this is probably the nicest.” To a round of applause from those gathered Caro continued. “With all my words I really don’t have words. Thank you.”

“We thank you for all the things you have done for us—for our students,” responded Dr. Kelly. “This is the only classroom named by academics for an academic.” 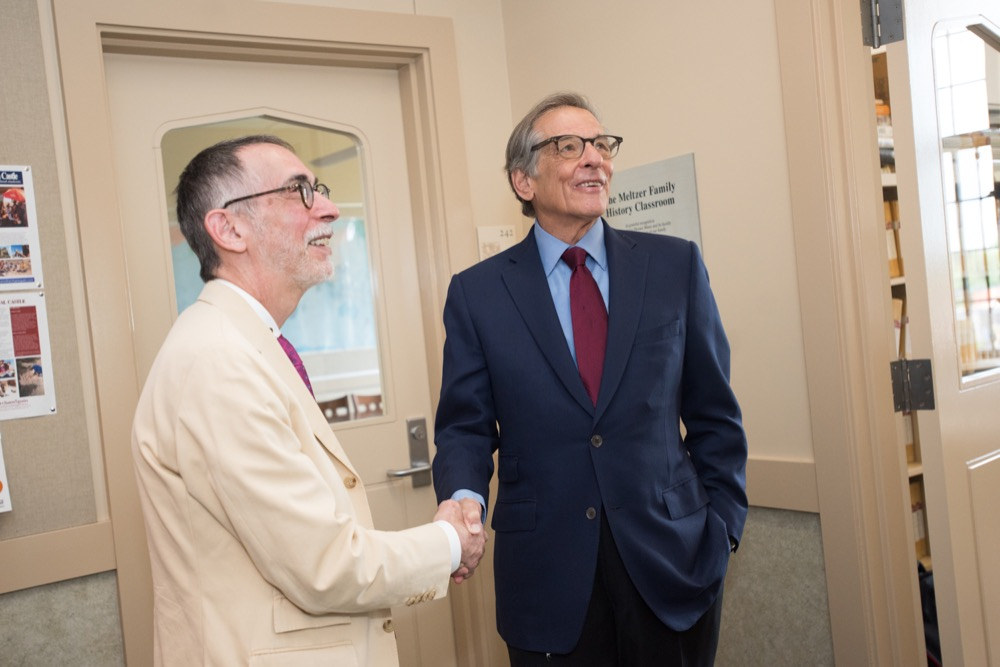 Over the years, since 1975 when Caro published the Pulitzer Prize-winning biography The Power Broker about Robert Moses, the alumnus has published four volumes of his epic The Years of Lyndon Johnson, including: The Path to Power (1983); Means of Ascent (1990); the Pulitzer Prize winning Master of the Senate (2003); and The Passage of Power (2012). Along with his two Pulitzer Prizes the author/historian has been honored with three National Book Critics Circle Awards; the National Book Award; the Francis Parkman Prize, awarded by the Society of American Historians to the book that best "exemplifies the union of the historian and the artist"; and numerous other major literary honors, including the Gold Medal in Biography from the National Academy of Arts and Letters. In November 2016 Caro was awarded the National Humanities Medal, awarded by former President Barack Obama. But, in a Paris Review interview published in spring 2016 Caro shared, “The nicest thing that’s happened to me is … Horace Mann said they wanted to name a prize after me.”

In response to Horace Mann School’s latest addition of The Robert A. Caro History Classroom the alumnus stated, “It’s hard for me to think of anything that would make me happier. Thank you.” 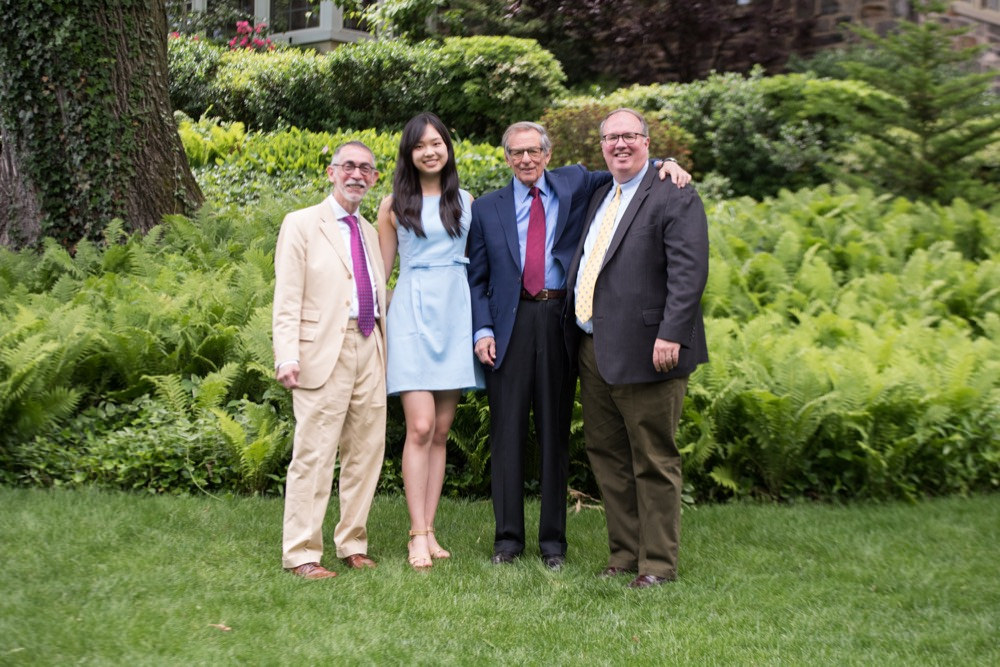 At the luncheon, with guests including the HM History Department faculty, members of Caro’s family and of his HM Class of 1953, Bienstock explained the significance of the literary prize to Horace Mann School, noting that numerous students have begun devoting class and Independent Study project time to the writing of history. Some students are even pursuing additional history research on their own. “Happily, the creation of the Robert Caro Prize has increased the number of semester and full year research essays. Students report how much they enjoy working on their papers. They feel a sense of ownership about their research topics. Over the last six years, award-winning research papers have, for example, given us insight into how The New York Times covered the Holocaust; and taught us about the devastating impact of the 1918 influenza epidemic.” The writer of that 2015 prize winning work, Lindsay Zelson ’15, was at the event, and confirmed how much the award had influenced her subsequent pursuit of history studies in college.

But, perhaps most significant was that YuanJun (Sarah) Zeng ’17, the winner of this year’s Robert Caro prize, had won the award in 2016. Inspired and encouraged by this acclamation, she had even been able to turn to Caro for advice on how to pursue the research that resulted her eloquent and deeply insightful paper “The Secret Road to Rapprochement: Sino-American Relations in the 1970s.” For this young historian connecting with her esteemed fellow HM alum was one of the most influential of her Horace Mann School experience.

To see more photos from the event, visit the Media Gallery album here.