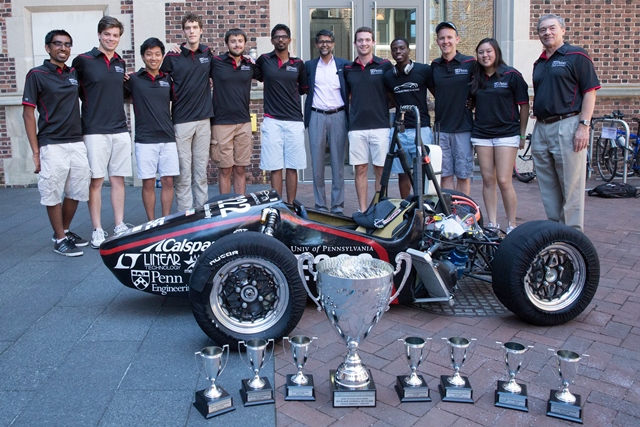 Horace Mann School alumni Andrew Remec ’13 and Jay Fleischer ’14, together with their University of Pennsylvania School of Engineering and Applied Science (SEAS) teammates, took first place in the Society for Applied Engineering (SAE) International Formula SAE – a race that pits custom-built, high-performance racecars created by student engineering teams from around the world against one another. Not only did the Penn team win the race, its members triumphed with an electric car they built to demonstrate that it could hold its own against the gas-powered cars that made up the majority of the field in the meet, which took place in Lincoln, Nebraska over the weekend of June 17, 2015. Competing were more than a hundred teams from the United States, Canada, Mexico, Brazil, India and Japan. Andrew Remec was also one of his team’s five drivers.

SAE International, an automotive engineering society, hosts an annual series of racing events designed to spur creativity, innovation and problem solving in the next generation of engineering students. Students at Penn’s SEAS, Remec, Fleischer and 30 other student members of their team were united by their desire to push the envelope of what an electric car can do, not only as an environmentally sustainable alternative, but in the qualities that make driving fun. Having the opportunity to race their car on a high-speed test track provides the perfect venue for developing this synthesis. Even getting on the track is an accomplishment. Most of the 20 electric racing teams that came to the event, including peer automotive engineering schools MIT and Carnegie Mellon, were disqualified during the event’s exacting technical inspections. Drawing on the lessons they learned when they were confounded by REVO, their previous year’s entry, the team put a year’s worth of fine-tuning into its successor, REV1. REV1 took first place among electrics overall, winning seven of the eight categories, including overall design, cornering, endurance and time-trials on a full racetrack. The acceleration test was one of the team’s strongest suits. Along with taking first among electrics, REV1 would have beaten all but three of the gas-powered cars. Beyond design upgrades in the shop, the team was able to do more rigorous field-testing of their vehicle this year, because of the University’s new Pennovation Works that allowed for extra practice space.

Remec and Fleischer were among the team members who worked 40 to 60 hours a week on the car throughout the full school year. But, that’s something the two alums got used to doing when they worked together as students at Horace Mann School, devoting considerable hours to studying robotics and participating in competitions through the HM Robotics and “Basement Lions” teams. Remec, a rising junior at Penn, has been on the Dean’s List for the past two years despite his intense course load. He is also a Rachleff Scholar, having earned the SEAS’ top engineering honor because of his first-year grades. He has been working in the Modular Robotics Lab and with the Penn Electric Race Team since arriving at the university. Andrew encouraged his younger friend Jay to apply to the University of Pennsylvania and its SEAS, and to enroll at the school upon his acceptance. As soon as Fleischer arrived at Penn, he too joined the team, again with Remec’s encouragement, and has contributed greatly to its engineering efforts.

Upon returning from Nebraska to Philadelphia the team was greeted by their Dean and Mechanical Engineering faculty, and celebrated with a surprise ceremony. To see Fleischer and Remec enjoying the celebrations click here.